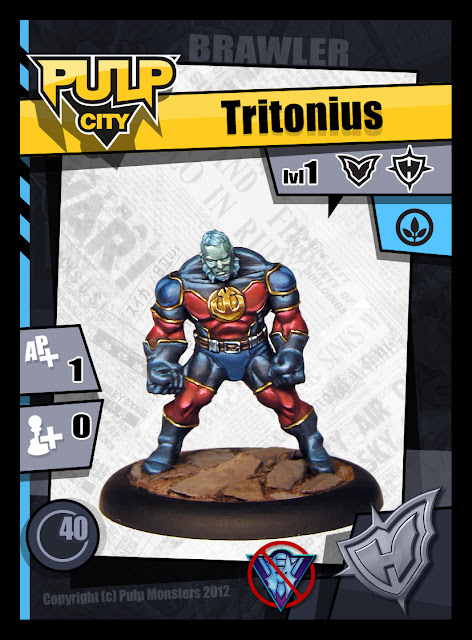 Today Pulp City posted a great bit of news.
The first bits of info on the new Supreme Edition, including a picture of the new cards (above)

Best Season Greetings from Pulp City! Whether you are celebrating Christmas, Hanukkah, Yule or any other holiday in December OR you are just taking a couple of days off due to other people’s celebration, may this be a great time for you!

I’m looking forward to 2013. Like no other year in Pulp City, save for the first one.
I’m looking forward to sharing the gargantuan amount of work that we had done to make Pulp City once again your prime choice of a super-powered miniature skirmish game. It’s like buying a Christmas present for your loved ones in June and having to hold on to the secret for 6 months.
The changes have been hinted, whispered about for a couple months. We wanted to revise how the whole project works, addressing its biggest concerns and supersizing its biggest strengths.
Let me talk you through them:

PAINS: there are two.
First, it is regularity of releases. We are a tiny wee-bit of a hobby company with no formal positions and you know the story. Pulp City always looked bigger than it was. We’ve heavily invested into the miniatures, rulebooks and packaging the majors have, we hired the best sculptors, painters and designers and then usually hit the wall of our daytime jobs standing in the way of releasing them. Reverting to blister packaging and smarter production ways (that includes doing most of the things locally) should speed up the things. Hold me accountable, if I fail you in that regard in 2013 – it will mean I’m too short for the job!

Second,  let’s go back to the roots of Pulp City. It was always meant to be a casual game, first skirmish choice to go with the big games that occupy your minds and wallets. Being a gamer myself, I noticed we strayed from this path. Pulp City became an insider game – increasingly difficult to demo as the individual model rules were a rulebook on its own. Did I like that? No. The older I get, the more I like my games crystal clear, games where strategy prevails over blocks of texts on individual cards.
What  does it mean for you?

As you probably know, the next couple of releases will come with the Pulp City v.1 cards.
After that, welcome the Supreme Engine. The new rule set built on what you loved about Pulp City and streamlined to the extreme. It is a versatile tool to introduce build upon: rules for customizable Supremes, fantasy games with heroic twist (looking at you Reaver Lords) etc.
Why is it so special (other than because we’ve invested one year into it)?

- it speeds things up. Considerably. Level 12 games take 60 minutes,
- it is streamlined – profiles and Actions read like formulas,
- there are few items to track – it’s about instant gratification,
- it’s even more about your choices – from recruitment to the strategy and tactics.

There are some BIG changes.
First, it’s the cards. They serve the double purposed. Front side serves as the cover for the blister and has all recruitment info (Levels, Factions, team contributions), backside has all the gaming info. Now, here’s our ultimate goal – it is all info you need, once you know the basics, there is no reason to reach for the rulebook or even flip the card.

Second, it’s what models can do. All active things are Actions, all passives are Powers. Gone are the Skills – all you need it on your card, described and explained. Our goal was to get rid of all of the things that you end up using every 10th Encounter.

Third, the Actions. Gone is the old Opposed Roll which usually was a flat way to measure the power distance between two models in the laboratory conditions. Welcome Action roll that encourages smart dice pooling that happens if you think about positioning, synergies etc. If you win it, it’s only half of the fun. The second part is how many FX (special effects) will you trigger and how will you combine them. Wanna go for maximum damage? Or maybe a massive knockback and stun? Or maybe a combination of all?
Fourth, it is the battlefield roles. Each model comes with one and they are very intuitive. Brawlers roll more dice on CC, Blasters on Ranged while Support generate more AP when they are in the thick of the battle. There are some surprises as well – like Powerhouses, guys that are hopeless on their own (they generate 0 AP, yes, 0 AP) but like no other class deal damage through Trait and FX supremacy.
Fifth, thanks to outstanding work from Melvin, there are a lot of new shiny things, like faction logos and much more!

Take a look at the WIP of the new card. Your feedback is welcomed!
It will be even more crucial when we go into the open beta early 2013.

As you see, the card is pretty clear about who Tritonious is and how many goodies he brings to the table.
He is not your choice when it comes to generating Minions and AP, you know he is an unaligned Hero/Villain and not a big fan of Ulthars.
You know how to base him (base size) and that he will roll some extra dice due to his battlefield role.

Loads of great info there.
Did you notice the part about Build Your Own Supremes?

This is going to be such a great time for fans of Pulp City.
What do you think? 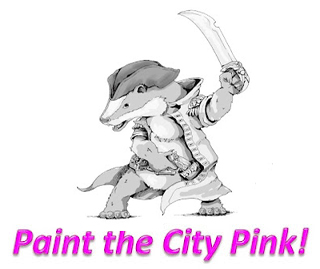