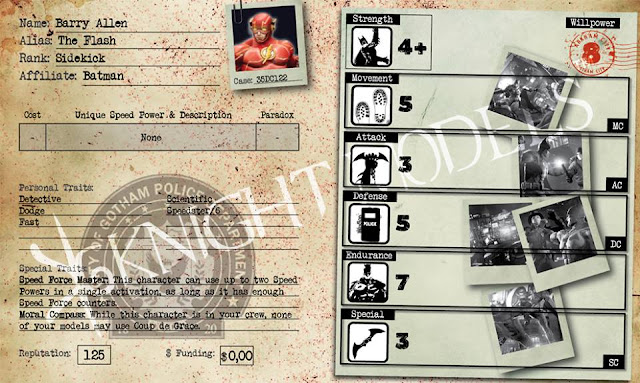 Over on the Knight Models Facebook Page they have just previewed the card for the New 52 comic Flash!

It looks like there will be all sorts of new things coming in the Flash / Arrow expansion.
Speed Powers, Speed Force Counters (maybe from his Speedster skill?), Paradoxes and more!

What do you think from this first look?

The Official Marvel Mini Games FAQ 1.1 is now up!

You can find it HERE and in top bar of this page ^.

Working with Knight Models, we have cleared up as many situations as possible with this update.
Hope you enjoy it!

It also shows GRODD and an ape henchman as well as a new Harley henchman.

With each day I'm getting more excited  by this.

The Batmobile Roars into Gotham!

This time it's VEHICLE RULES!
You will finally be able to roar across the tabletop in the Batmobile!
It looks like the SWAT van and more will be usable as well.

Which DC vehicles would you like to see in a game?

In the above image, it also looks like we will be seeing more Scarecrow / Arkham Knight / Deathstroke Militia soon as well!

This book has me beyond excited for the future of the Batman Mini Game.

Suicide Squad, Birds of Prey and YOUR CHOICE!

Knight Models have let out some more info on the upcoming Flash / Arrow expansion for the Batman Miniature Game.

It will have rules for using themed teams like the Suicide Squad, Birds of Prey, Teen Titans and Secret Six.
With a new Deadshot and Captain Boomerang in the image, I expect we will see all sorts of great characters on the way.
Hoping for King Shark, Starfire and Red Robin myself.

KM also want to know which Free Agents you want to see next for the game.
They have a Poll on the Official BMG Faebook group - Arkham City Limits

Head over and place your vote. 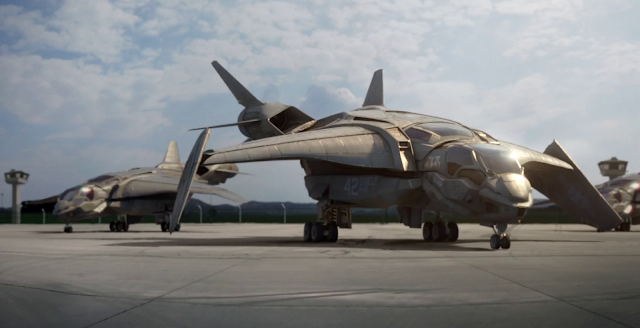 In my hunt for goodies to add to my Marvel Mini Game tables, I came across a Hasbro Quinjet from Avengers Assemble.
Some were crazy money but I found one cheap on eBay and it arrived this weekend. 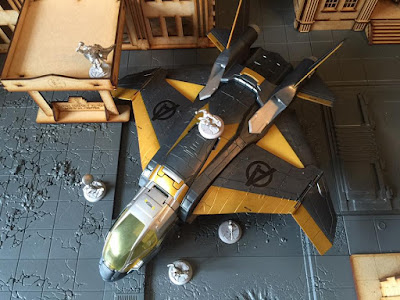 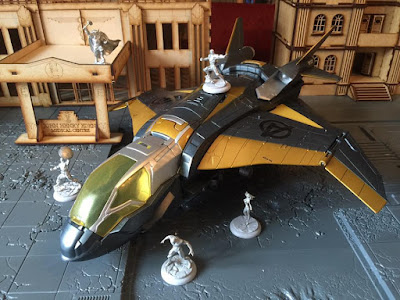 I think it looked quite good on the table but maybe a little big?
I know, time to watch Avengers Assemble and check! (good excuse yeah?)

In the movie there are two characters side by side in the cockpit and four characters all standing in the back making this toy almost spot on for size.

What do you think? Too big or just right?


I also had a random thought while playing a couple of games.
Being a Marvel fan for years I have characters that I like a characters that I don't from both the comics and the movies.
This gaming is changing that!

I have never been keen on Cap, Thor or Cyclops but on the table they are great fun.
On the other hand, I love the Guardians but I just can't get on with them on the table. My wife is evil with them though so it must be me and not the rules.

Have you found the same sort of thing? Is the MUMG changing the way you see different Supers?

The Speed Force is Coming!

This has just appeared on the Knight Models Facebook Page..
The Speed Force is coming to the Batman Miniature Games.

While I expected the Flash / Arrow expansion to be just TV characters, this new pic looks like they will be going for comics as well.
First ones being the New 52 Flash and the Black Flash, Death of Speedsters. 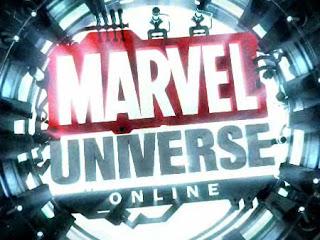 Hi folks,
Today I wanted to give you a couple of very handy links if you are fans of the Marvel Universe and Spider-Man miniature games from Knight Models.
The two main online communities (that I know of) filled with like-minded gamers.

First up is the Official KM Marvel Miniature Games group on Facebook.
You can find it HERE.
With over 1300 members already, it's packed full of chat, ideas and the MU models are starting to appear in all sorts of schemes and games.

If you prefer using forums, there is now a Marvel / Spider-Man forum.
This can be found HERE.
It's fairy new so is just starting to get off the ground but is already full of great threads.

Head over and check them out.

If you know of any others, post them below.

- Hendybadger
Posted by Unknown at 3:56 pm No comments:

CW Flash and Arrow head for the Batman Mini Game!

This has just been posted up on the Knight Models site.
Oliver Queen and Barry Allen from the CW TV series will be the focus of the first expansion for the Batman Mini Game!

I know we have an Arrow model and a Nyssa model already, but I can't wait to see what else they come up with.

I wonder if this will also contain the Vehicle rules and Themed teams like the Suicide Squad that KM have mentioned recently?

What do you want to see from this expansion?

- Hendybadger
Posted by Unknown at 7:20 pm No comments:

Avengers Downtown Board for Marvel Universe 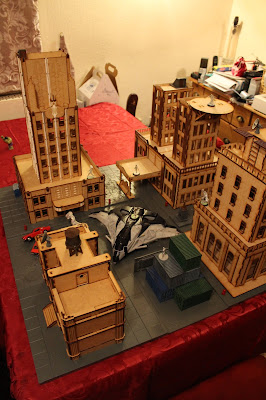 I openly admit to being a scenery hoarder. I have piles of boards, buildings, rocks hills and all sorts.
Not that I said 'hoarder' and not 'builder'.
While I was at work over the last week, my wife took matters into her own hands. 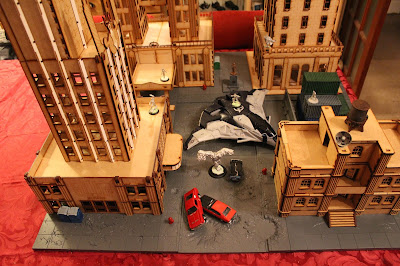 Over a few days she dug through the piles of unbuilt boxes and put together her own Avengers Downtown board.
To start off with there a mixture of Secret Weapon Tablescapes tiles from the Urban clean and damaged sets.
Then on those are the Mohawk Tower and Olympus Building (front two above) from Multiverse Gaming and the Hospital and Bank from TT Combat. 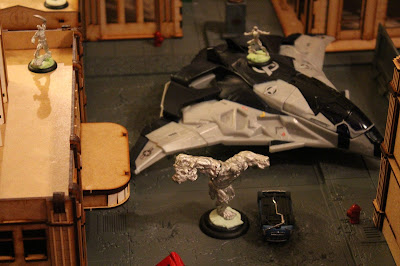 To really make it Avengers themed, I picked up an Age of Ultron Quinjet for her. It's from a 2" figure set by Hasbro and has a Captain America on motorbike that shoots out the bottom which was rapidly stolen by our 4 year old.
With Ironman on top and Hulk in front, I think it looks a pretty good scale.
The 'bits' box was then raided for cars, containers, portaloos, hydrants and more. 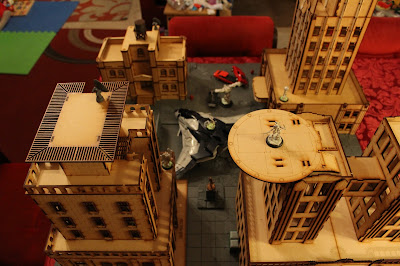 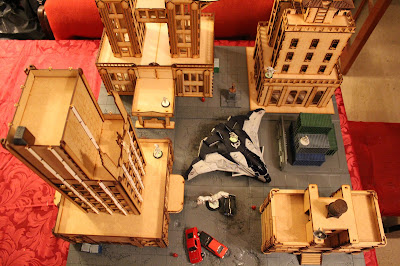 The next step is paint obviously but I think we are going to have to get a few games in first.

What do you think of this set up?
What would you add or remove?

Tabletop Gaming Issue 4 is Out and includes Marvel! 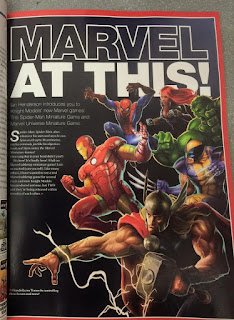 The new issue of Tabletop Gaming magazine is out today in the UK and contains a great article on Knight Model's new Marvel games.
Bloody good writer there!

It's in newsagents and gaming stores across the country and available to order online in print or digital HERE. 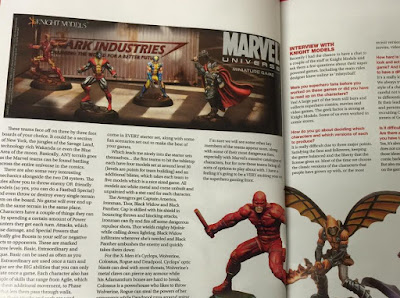 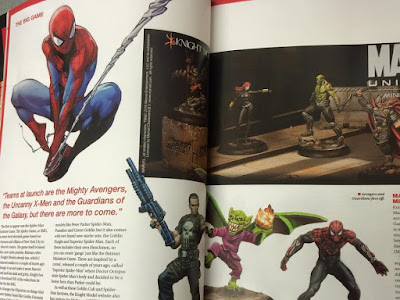 Obviously there's lots of other goodies in there as well.
Grab one and check it out. 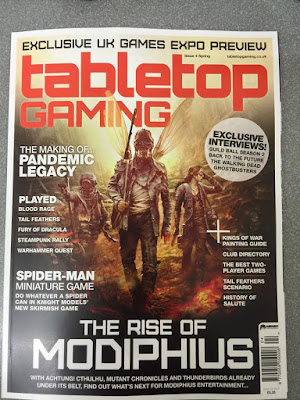 Starting a Guardians of the Galaxy Board 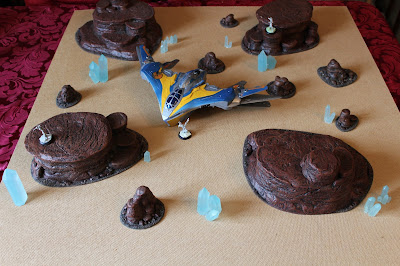 With the Marvel Universe Mini Game coming any day now, I thought I would start on a couple of new boards.
The first was planned to be 'loosely' based on the plant from the start of Guardians of the Galaxy.
Using some old Gale Force 9 hills, rocks and crystals I started to throw things together. 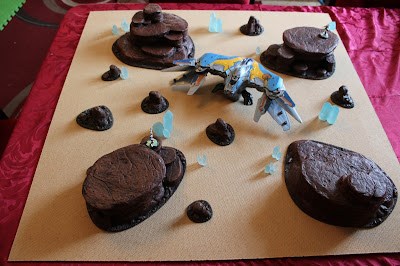 While it isn't a very high and multi level board, the Marvel game has a lot of movement like flyers and teleporters and relies less on cover than the Batman game so it should be fine. One of the main factors was to have things to throw around. I thought the small rocks and crystals would be ideal for that. 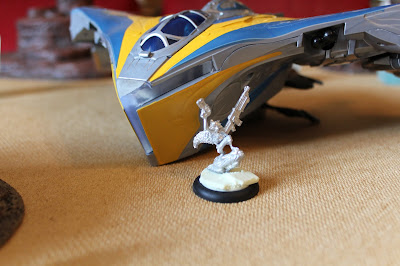 Drew on the Marvel Facebook Group dug out his Hasbro Milano and I remembered that I had one as well from my wife a while ago. It obviously ended up buried in the 4 year olds toy box though. Digging it back out and finding 'most' of the bits, I found it was almost the right scale and looked good next to Rocket. 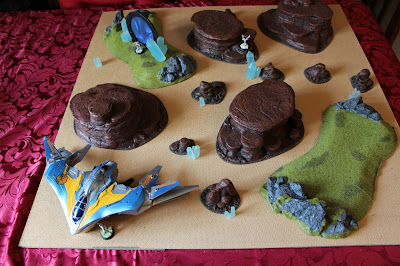 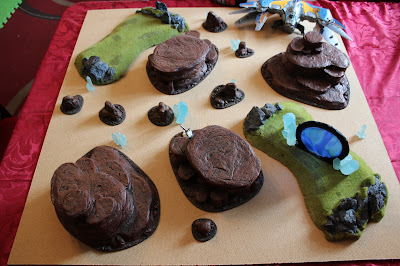 When I posted up the first pics online someone suggested I should add some tech/relics. So I had a look around in the old terrain boxes to see what would fit.
At the same time I found some foam hills / rocks which filled the board up a bit. These as well as the board will be sprayed to match the GF9 hills. 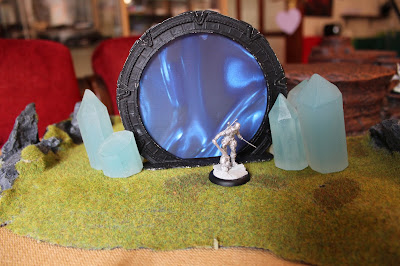 The tech I found was a Stargate that has been around for several years. I don't even remember where I got it from now. With some cool card making plastic from my wife's hobby box, it got turned into a full on portal. Nice line of sight blocker as well as Deadpool found out.

Once the weather is a little nicer I can get the texture on the board and the sprays on everything.
Until then there are more boards to plan. The next will be an Avengers themed downtown board of HUGE buildings. Mrs Badger is actually building one of them as I type.
Hopefully pictures of that one up in the next week.

So, what do you think of the GotG set up?
Anythng need adding or removing?

What sort of boards are you planning for Marvel?