Knight Models have just released a new wave of minis for the Marvel Universe game and they look amazing.

First up is the team box for the Dark Avengers. The first 40 Lvl box set contains -

Iron Patriot (Norman Osbourne). The former Green Goblin is a Lvl 7 evil version of Ironman. Packed with Repulsors and even a Tactical Missile.

Ms Marvel (Karla Sofen). Formally Moonstone, Ms Marvel is a Lvl 7 Villain with a lot of ranged energy attacks and the power to become intangible.

Ares, the God of War. Ares is a Lvl 10 Neutral Superhuman so he can even head off and join the Avengers. A beast in close combat with a Supernatural axe attack and he can increase the Attack value of everyone around him.

The Sentry, also the Void. Robert Reynolds is one of the most powerful people in the universe. He is a Lvl 16 Villain that even damages fellow team mates with the Void if they get too close. But, he can throw out a LOT of damage and comes back again after he is killed.

Next is Ben Grimm, the Thing.
Being a member of many teams, the Thing is a Lvl 7 Cosmic and Super Hero. Built like an absolute tank, the Thing can take and dish out a lot of damage.

Finally we have Dr Doom. Sorry, DOOM!!!!!!!!
A Lvl 11 Neutral model for Cosmic and Super teams. He mixes science and magic for attacks and defence. But he doesn't play well with others so anyone close to him can't use Overloads.

Can't wait to get the Sentry on the table.

What do you think it could be? 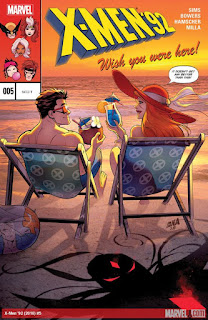 Hey there folks,
It's August and it has crept around again really quickly.

As many people and some gaming companies do, it's time for me to have a break for a while.

This time of year is manic in my 'real life' job and I am also working on 2 big gaming projects behind the scenes so have my hands pretty full.

See you in a few weeks. The giveaway post had loads of great ideas and I just couldn't pick one so ended up going for a random draw.

The winner is.... Compel

Please email me HERE to claim your prize.

Thanks to all that took part and I'm sure we will have something else to hand out soon.