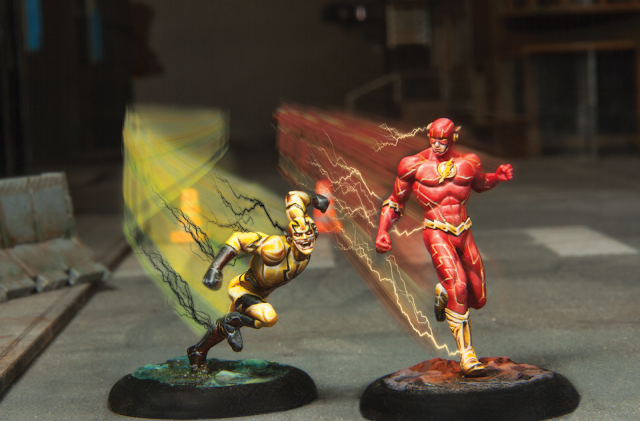 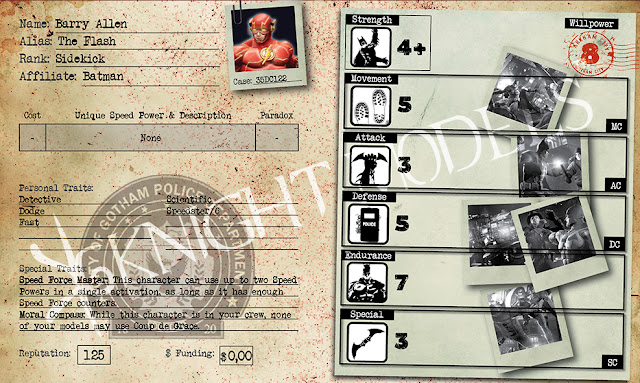 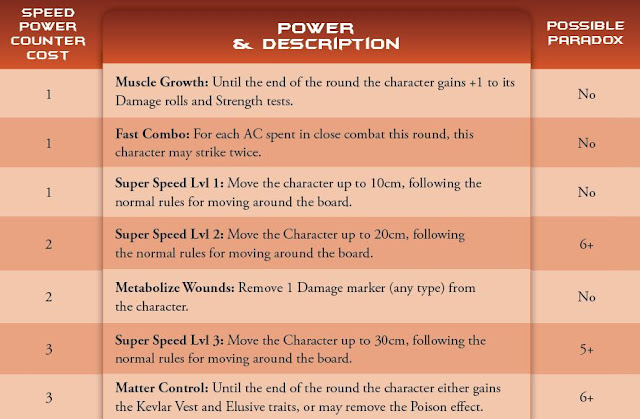 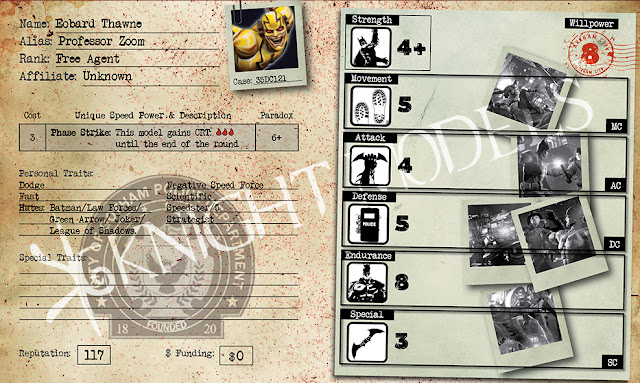 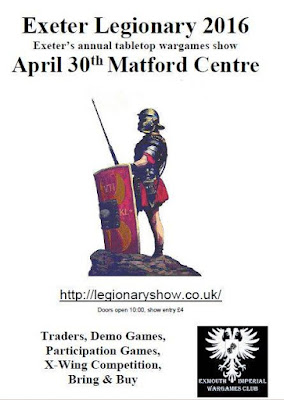 It's almost time for the Legionary show once again.
April 30th, Exeter Devon. All the info can be found HERE

They have loads of gaming stall, demos and events. Well worth checking out if you can.

ToaTS wont be putting on any games this year, but we will be there to take a look around and might even be able to do a bit of a report on the day as well.

Hope to see a few of you there.

New Bane and Penguin Equipment for the BMG

Our friends over at the Spanish / English Blog La Bibliotecha de Alfred have some more equipment list spoilers from the new Flash / Arrow expansion book for the Batman Miniature Game.

These list include some great additions. Especially things like the Backpack which means you can carry Loot without spending MC.
Bane's themed goodies are also very nice.
Being able to use more than 1 Titan Dose per game with cheaper Doses and being able to inject friendlies with Titan makes the Bane crew a lot more deadly than it already was.

What do you think of these new additions?

Hey folks,
Are you in or around North Cornwall UK?

I new club has started up at the Poldark Inn, Delabole on a Friday night.

The LEG Tabletop Wargames play all sorts from Marvel to 40K. X-Wing to Warmachine and Across the Dead Earth to Batman.

You can find the clubs Facebook group HERE. Or if you are not on the book of faces, just show your interest below and we can sort out contact.

Here are a few shots from the last couple of weeks. 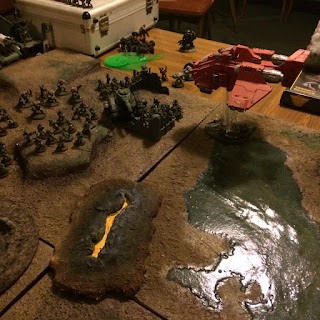 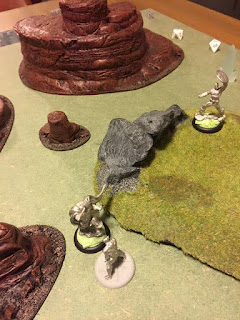 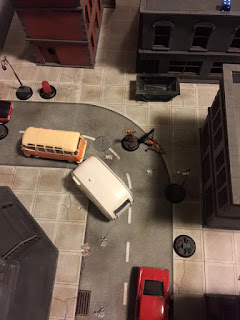 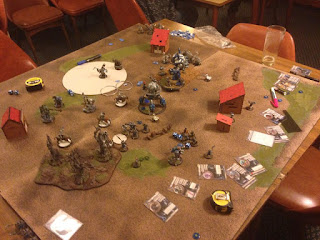 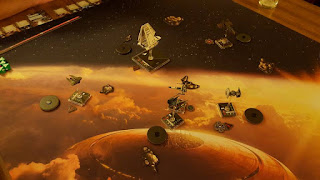 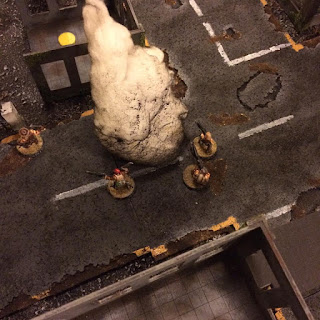 Hope to see a few of you there in the future (They have a bar!)

Guardians of the Galaxy Starter Review 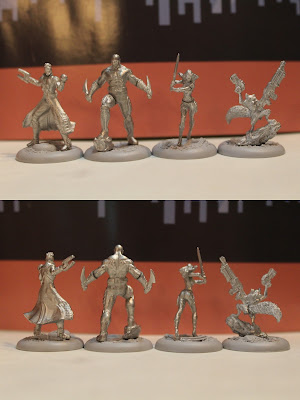 Hey there folks,
My latest Marvel review is now up on the Wayland Games Blog (here)

Check it out and let me know what you think.

- Hendybadger
Posted by Unknown at 2:35 pm No comments: 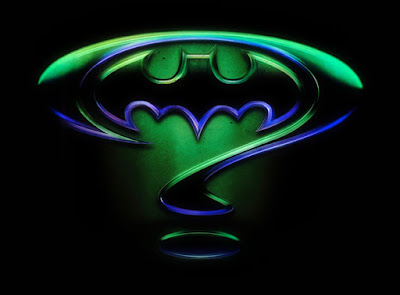 Hi Batfans,
Sorry for the quiet week, I have been insanely busy. But lots to come on here over the next couple of weeks.

First up, the new Batman Miniature Game FAQ is up HERE.
I thought I would cover a few of the key points in this post.

Model do NOT block Line of Sight and may NOT carry two items that need MC, such as Loot.

This is a nice addition,
Spring into the Air now includes a Vertical Jump. Really handy for models to get up buildings quickly.

Manipulate does NOT count as a movement action. You can now load up with Ammo and still use your full RoF if you don't move.

Henchmen may NOT take equipment that lets them take a second copy of a Trait they already have.

Batman AC and Batman AK both gain Martial Expert. This is a Critical on the Collateral dice on a 4+ instead of the usual 6.

There are several other clarifications as well.

What do you think of these new changes?
I know I will be using AC Bats and Robin more!

The La Biblioteca de Alfred blog has posted up one of the new equipment lists from the Flash / Arrow expansion for the Batman Mini Game.

Not only do these new lists contain more and new options like Radios and Helmets, they also have themed equipment based on which characters are in your crew.

Can't wait to see what the other crews get.

- Hendybadger
Posted by Unknown at 11:30 am No comments:

Yesterday, Knight Models hit with an EPIC amount of new releases for the Marvel and Batman games.
As I'm obviously more of a Marvelite, I will start with those

Gambit, aka Remy Lebeau, joins the X-men. A Level 7 mixed melee and ranged attacker with Acrobat and Stealth will be great addition.

Next up we have Groot for the Guardians of the Galaxy.
Groot is a Level 9 tank. A lot of defensive and healing powers as well as some decent melee make Groot very handy and very dangerous.

The Batman game doesn't just get models this month. It gets an entire expansion!
The Flash and Arrow book brings rules for new teams, the Speed Force, Vechiles, scenarios and much more.
If you pre-order (even from your local shop) you can get your hnds on your very own Black Flash. Limited Edition and comes with his own stat card.
Talking of Limited Edition, there is even an alternate comic cover you can get direct from KM.

What are Speed Force rules without Speedsters?
The Flash joins Batmans crew as a Sidekick at 125 Rep. We don't know what the Speed Force powers do yet so I can't tell you much more about him.
Professor Zoom, aka Eobard Thawne, is also her to take down the Flash by joining any of the other Villains crews except for Joker or the League. A 117 Rep Free Agent may take up a lot but I expect he's worth it.

The new team rules include the Suicide Squad. But the members can also joins crews as per the basic rules.
A New Deadshot is here for any Villian except Joker at 90 Rep and $600. His Barret can hit with up to SEVEN Blood damage!
Not as picky but just as dangerous is Captain Boomerang. Joining any Villain for 82 Rep and $350.
Armed to the teeth with boomerangs for all occasions then he can even bounce off people.

If you are a fan of the Animated style KM have been producing, this month brings the Green Arrow and Batgirl.
The Green Arrow is a 77 Rep Leader for his crew and has an awesome Boxing Glove arrow.
Batgirl is a 47 Rep Free Agent for Batman or Jim Gordon.
These models keep with the same style of basic stats and rules so are ideal for people learning or younger players.

The final model for this month is the AWESOME Hawkman.
Able to join Batman or the Green Arrow as a Free Agent, you could create your own Justice League or Legends of Tomorrow.
At 109 Rep he is a beast with some great flight abilities and Teamwork with Hawkgirl (obviously)

The goodies don't stop there.
Q Workshop have created some lovely looking Batman and Joker dice with Robin or Harley collateral damage dice. (Mrs Badger made me get the Harley one)

So, what do you think of the new releases?

As you may know, as well as writing here on ToaTS and a couple of other places, I also write on the Wayland Games blog.

My latest post over there is a review of the new Avengers starter for the Marvel Universe Miniature Game.
Check it out HERE and let me know what you think. 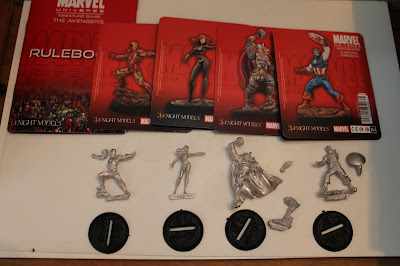 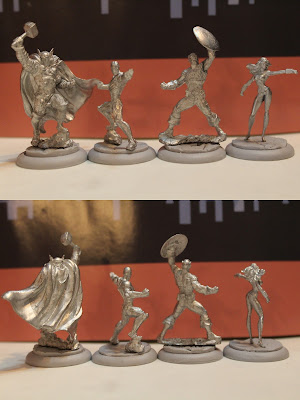 An Animated Green Arrow Leader armed with a boxing glove arrow! The Batman game is getting a lot more green and pointy. 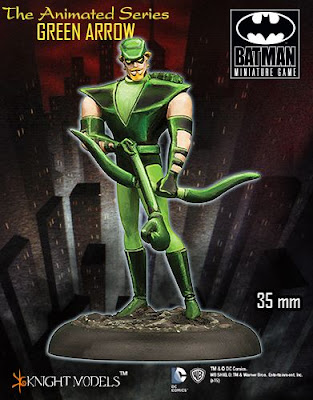 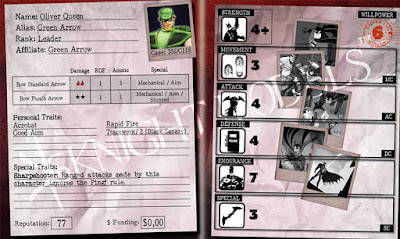 I finally have rules for my Green Arrow boxing glove conversion.

What do you think of this new addition?

Avengers vs Guardians IN SPAAAAAAACE!!!!!! 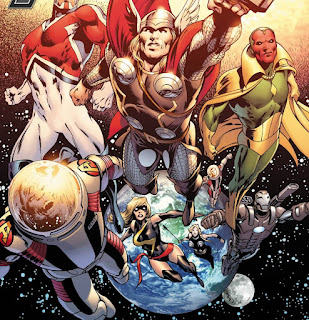 I landed a new Bespin game mat for X-Wing the other day and it instantly gave me an idea.

In the comics, the Avengers, Guardians and others are often seen floating around in space. Could I pull this off for a game board?

I grabbed my trusty Gale Force 9 Badlands rocks, a couple of toy ships and came up with this asteroid belt set up. 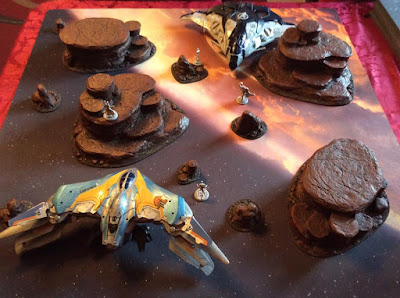 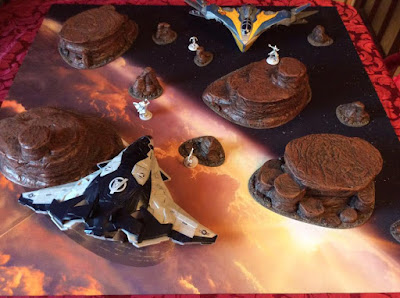 For an idea of scale and such we have Thor and Ironman vs Starlord and Nova.

What do you think?
Is this something you want to try?