I thought I would add a little update about the things Im working on at the moment.
To start with we have the Characters from my Talion Charter Merc force.
They are all currently half way through laying down the foundation colours. And trying to work out where I want which colours. 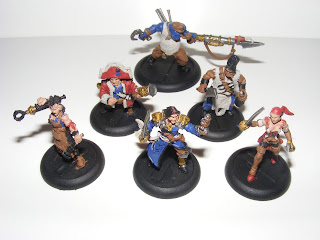 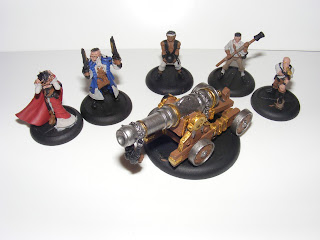 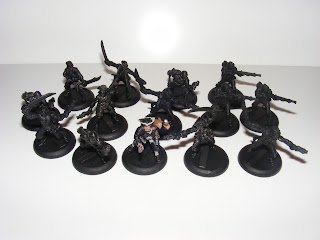 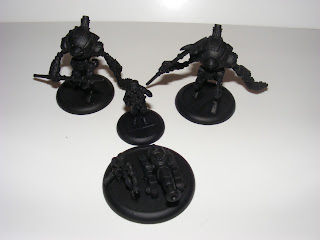 My Vanguard (which is going to be reposed) and my favourite Talion/Privateer model, the Mariner 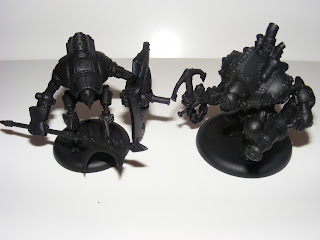 I have tried my first warjack conversion with the Nomad. I wanted it to look abit more pirate like so replaced the buckler with a metal ships wheel I picked up and the sword has been replaced with a plasticard hilt and a plastic Orge sword. I think its looks good and fits well. What do you think? 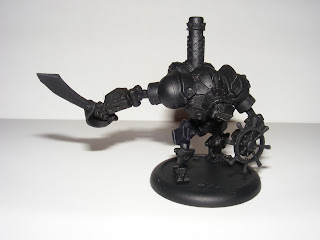 All the above models are only pinned to thier bases at the moment because I wanted to do something abit different with them. I have got my hands on a shed load of wooden coffee stirers. After using PVA to create large sheets of wood I can cut bases from I wondered how to paint them. Putting them in before the undercoat wood (sorry) have lost all the grain detail. So I then decided to stain them and add them to the bases as inserts after the minis were painted. I tried a couple of different inks and washes and settled on the 3rd one (shown below) 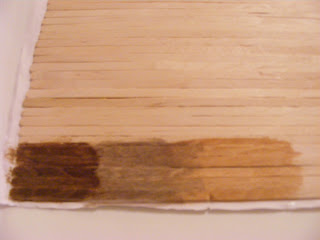 Here is the next project. More Blindwater Minions! The bases in there are deep resin bases I got from Fenris in the 3 different Hordes sizes. 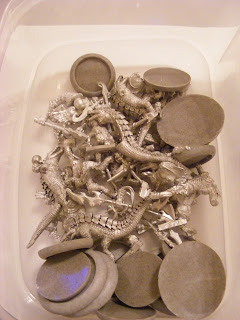 Seeing I was going for different bases on the Talion pirates I decided to go for something different on the Gators aswell. With the extra deep bases I had I tried out some swamp bases. Using different types of sand, flock and static grass I came up with the below tests. I know they look a little cloudy but I now know how to make them look better by doing the water in much shallower layers. 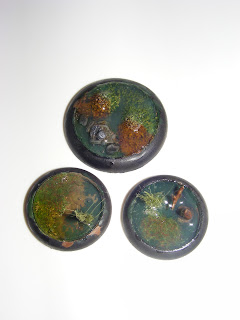 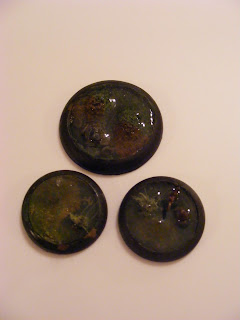 There we are.
My current projects. There will be more added to these and also a couple more projects started soon.
Open to all comments, thoughts and ideas.
Posted by Unknown at 9:13 pm 5 comments:

And So It Begins!

So there we go. I am now an official Privateer Press PressGanger. So many plans and ideas!

Lets go back and start at the begining .

Me and my Toys!
My name is Ian Henderson. I am a 26yr old Wargamer and member of North Cornwall Beasts and Bionics gaming club.
I used to play Wargames when I was around 13 but stopped for quiet a while.
5 years ago I met my (now) wife and she took me into a model store. I have been collecting, building and playing since.
I starter playing Warmachine and Hordes about a year ago around the start of Mk2. After a play around with Khador I went for a large Retribution force. I then found my real love - PIRATES!
As you can tell by my picture I am abit of a pirate fan in general. I currently have a Talion Charter force of around 50pts with Captain Shae. And still afew minis yet to be built for it, including 2 other Casters.
This is and will always be my main army. I already have plans to take it up to 100pts and even further.
Thats without expanding into the other Merc contracts. I keep looking at Seaforge!
I am also in the process of creating a Blindwater Congregation Minions force. Over 20pts at the moment and waiting for more models to turn up / be released including the Forces book.

My next model plans include Grind and Monsterpocalypse which myy wife is getting me for Xmas. So many MonPoc models I like already and want to pick up. (This is going to get expensive)

As for Warmachine I want to expand my little Cryx force into a large 100pt+ force based on PIRATES! The more the better. Unsure on the Satyxis yet but I cant wait to get started on the Revenants and Ogrun.
I also want to expand the Khador into a Jacks, Mechs and MoWs only force because I love the models.
Hordes is going to the same sorts of sizes. Gators will grow and maybe get Farrow added.
Legion Beasts + Creatures and Circle Druids, Wolds + Wolves are also in planning.

Game wise I get to play atleast a couple of times a week at home or at our local club. And now Im a PGer I hope to play even more at other clubs including demos and intros.
The NCBB club has a WM/H league running at the moment. I am in 2nd so far but have only played 2 games with my 40pt Shae Tier 4 army. Won both though!

The Future
The club is planning a Breast Cancer Brawl tournament for March which I hope will go well.
And I also plan to run PP based games, events and intros at some of next years big gaming events.

So thats all for now I guess
If you want help with any events or intros ect please feel free to contact me
Have fun and Play like youve got a Pair!