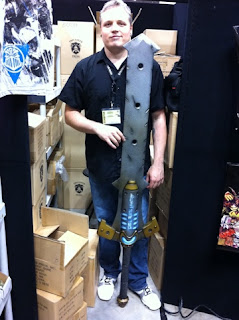 Picture from the No Quarter Blog of this years Gencon.
Originaly announcement >>HERE<<

Bellevue, WA September 26, 2011— Privateer Press is pleased to announce it has licensed the rights to produce life-sized foam-latex replica weapons from its WARMACHINE and HORDES tabletop miniatures games to Artyfakes Action Props Ltd.
The first item to be made into a full-scale reproduction is the impressive Quicksilver, Commander Coleman Stryker’s magical great sword.
“We are extremely pleased to be working with Artyfakes to bring the fantastic weaponry of WARMACHINE and HORDES to life in all its full-sized glory. Now anyone who has ever dreamed of wielding one of the most iconic blades from one of WARMACHINE’s most beloved characters can have own their very own Quicksilver,” said Director of Business Development William Shick.
Each replica will be individually hand constructed from high density foam and latex, allowing an unequalled tactile experience in full-scale reproductions.
When asked about the new line, Artyfakes owner Nic Samiotis said, “We have worked closely with Privateer Press to produce something which perfectly captures the character of the weapon, giving you the opportunity to imagine what it may be like to stand in Commander Stryker’s war-torn boots and defend Cygnar.”
For more information on Privateer Press and its tabletop miniatures games WARMACHINE and HORDES visit www.privateerpress.com.
For more information on Artyfakes, including release information for its WARMACHINE and HORDES replica line, visit www.artyfakes.co.uk
__________________________
About Privateer Press, Inc.
Privateer Press, Inc. is a privately held producer of entertainment and hobby brands based in the Seattle area. Its products include the Monsterpocalypse battle miniatures game, the award-winning WARMACHINE and HORDES hobby miniatures games, the award-winning Iron Kingdoms property, Bodger Games, the full-color No Quarter Magazine, the Formula P3 hobby line, and the upcoming science fiction property LEVEL 7. To learn more about Privateer Press, visit www.privateerpress.com or contact the president, Sherry Yeary, at (425) 643-5900 or sherry@privateerpress.com.

About WARMACHINE and HORDES
WARMACHINE and HORDES are the critically acclaimed tabletop games of miniatures combat designed by game industry veteran Matthew D. Wilson and placed in the award-winning setting of the Iron Kingdoms. Since the 2010 release of the second editions, entitled Mk II, the games have seen explosive growth among their player communities worldwide and are among the fastest-growing miniatures games on the market. 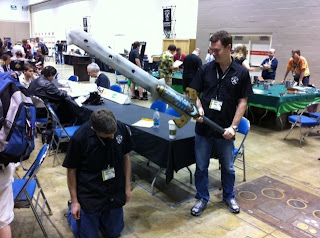 What do you think then people?
Theres a couple of weapons I would LOVE to own. Especially Shaes cutlass Squall!!!