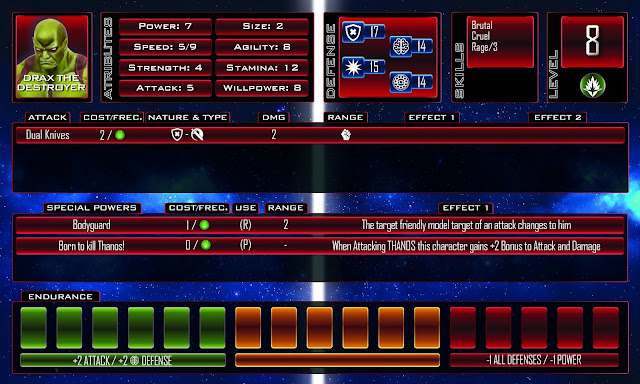 Knight Models have sent over the final version of one of the character cards to take a look at today.
I'll go through it bit by bit and explain what it all means.

Character
First up on the top is the characters picture and 'Super' name. Some will have their 'real' name as well if its different.

Attributes
Power: This is how many Power counters the model has to spend each turn.
Speed: The different Speeds in Inches the model can move. 1 Power for the first or 2 for the second.
Strength: This shows how strong a character is for picking up and throwing models and terrain.
Attack: How skilled they are. You roll 2D8 + Attack vs your opponent defense.
Size: The models general size. Used for being picked up and thrown.
Agility: This is for dodging Sprays, Explosions and Expansive Waves. 2D8, equal to or less than Agility.
Stamina: This is to see if your character stays standing when badly damaged. 2D8 equal or under to stay up or recover from being Knocked Out
Willpower: This is used to break free of mind control types of Special Powers. 2D8 equal or under,

Skills
These show the general skills a model has that are listed in the main rulebook. For Drax here it's-
Brutal: Add Push / 4 to a Critical
Cruel: +1 Damage is the targets Endurance is in the Red zone
Rage /3: Gain an additional 3 Power when recovering from KO.

Level:
8: This is the models Level used for team building and balancing games.
Logo: This shows the models affiliation. Guardians logo with green background is Cosmic / Hero

Attacks
Attack: The actions name
Cost / Freq: The Power cost to use the attack at the frequency it can be used. Green is as many time as you can. Blue is once per turn. Purple is once per game.
Nature & Type: The first logo is the Nature is the attack and will match a Defense. The second is the type. Some characters could be weak / resistant to certain types
DMG: The base damage the attack does.
Range: This will either have a 'Fist' for Melee or number for range in inches. Sometime is shows both which is a ranged Melee attack.
Effect 1/2: Here you will find any additional effects an attack has like alternate Overloads or Crits.

Special Powers
Name: The Name of the Power
Cost/Freq: As with attacks, Powers has a Power cost and frequency they can be used.
Use: Powers are either 'A'ctive (your turn), 'R'eactive (opponents turn) or 'P'assive (constant)
Range: The distance you can use this Power, 0 or - is on your self.
Effect: The effects and conditions of this Power when used.

Endurance Bar
This is in 3 sections. Green, Amber and Red.
As a model takes damage it fills each box one at a time from left to right.
As you are in each area, any listed + or - are applied until you move into the next section.
As you enter the Red you must make a Stamina Roll. If you fail you become KO.
At the end of each turn you must also make a Stamina Roll if you are in the Amber or Red and still standing.

- Hendybadger
Posted by Unknown at 2:35 pm