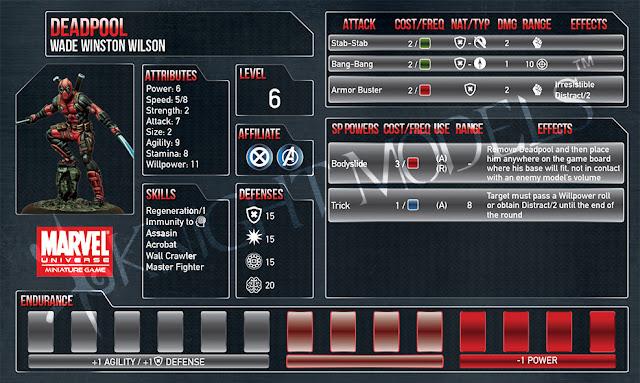 After taking on the feedback from the last character card preview, Knight Models have updated to this new design.
As a few things have changed and moved around, I'll go over all of the different sections again.

Top Left
Characters Alias and 'real' name. You can't take more than one person with the same 'real' name.
Character picture. - The matching model if there are alternate versions.

Attributes-
Power - How many Power counters they get each turn.
Speed - In inches. 1 Power to move the first value, 2 to move the second. Only one move per turn.
Strength - How strong they are for throwing items and other characters.
Attack - This is added to 2D8 for an Attack against the opponents Defense
Size - The models size for throwing
Agility - 2D8 equal or under to take half damage from Area effects
Stamina - 2D8 equal or under to stop becoming KO'd
Willpower - Used to fight off several Mental Special Powers

Top Right
Attacks - How a character causes damage
Attack - The actions name
Cost / Freq - The cost in Power to use the attack and the amount of times it can be used. As many as you can (green), once per turn (blue) or once per game (red)
Nature / Type - The first symbol is the Nature which will match a defense. The second is the Type which can is used for characters Immune, Resistant or Weak to it.
DMG - How may damage point a successful attack does.
Range - Either a Fist for Melee, number and Target for ranged or number and Fist for ranged Melee.
The is also Expansive Waves ((())) or Sprays.
Effects - Any additional effects the attack has like Distract, Irresistible ot alternate Criticals and Overloads.

Middle Right
Special Powers - Abilities specific to this character
SP Power - The abilities name
Cost/Freq - The same as Attacks above.
Use - This will either be Active (A) for us in your turn, Reactive (R) for use in your opponents turn or Passive (P) for constant.
Range - Either a number in Inches or - for self.
Effects - The specific effect this power has.

Bottom
Endurance Bar - This shows how much damage a model can take.
Each section could also have + or - modifiers to some stats while you are in it.
Grey - Normal Damage. Often a stat bonus.
Pale Red - Medium Damage. Needs a Stamina roll at the end of the turn or become KO.
Red - Heavy Damage. Needs a Stamina roll as your models ENTERS this zone as well as at the end of the turn. Usually negative modifiers.
Full - When the bar is full, the model in Incapacitated and removed form the game.

What do you think of this new design then?
Is it easy to understand?

- Hendybadger
Posted by Unknown at 2:04 pm